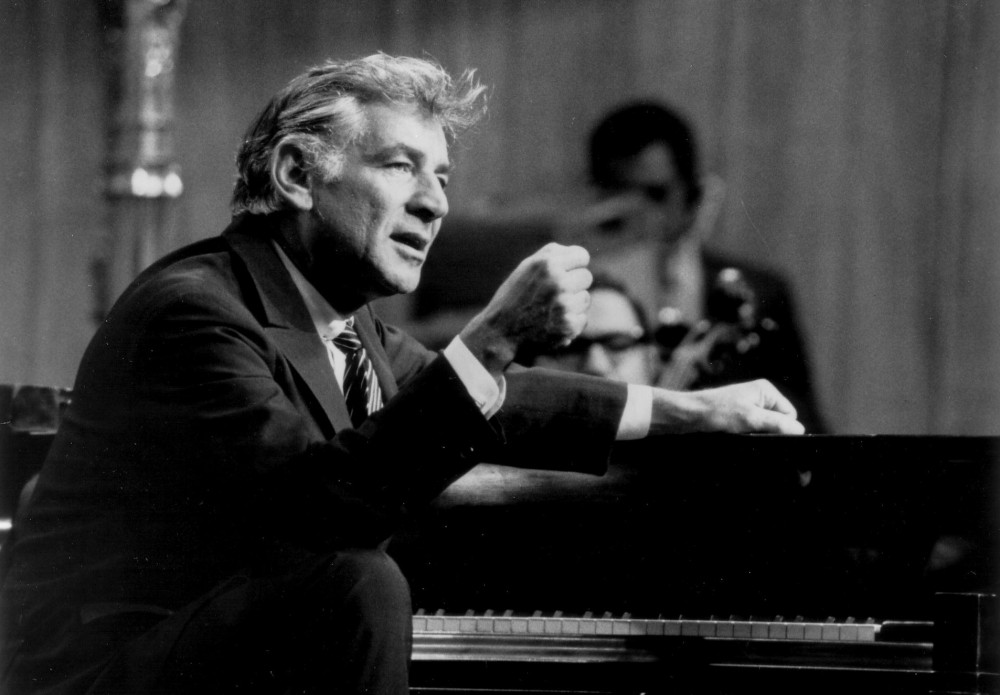 This iconic New Yorker was born in the environs of Boston, Mass., the son of Russian immigrants. His father, Samuel, had become successful in the beauty-supply business. His mother, Jennie, had a love of art and music. Over his father's objections, she sent the boy for piano lessons. He became excellent, even at a young age. His father, however, wanted him to join the family firm, but Leonard was adamant about studying music. He attended Harvard, where he studied with Edward Burlingame Hill and Walter Piston. After Harvard, Bernstein studied at the Curtis Institute with Vengerova (piano), Randall Thompson (orchestration), and Fritz Reiner (conducting). Undoubtedly, however, the vast influence on him as a young man was Aaron Copland, who along with David Diamond, gave him advice on his earliest efforts at composition. The "popular" Copland shows up in various guises almost throughout Bernstein's composing career. He also studied conducting with Koussevitzky at Tanglewood and in 1942 became Koussevitzsky's assistant. In light of Bernstein's later success, a reporter asked Samuel why he had put up such resistance to his son's choice of a musical career. Sam replied, "Who knew he was going to turn out to be Leonard Bernstein?"

In Goldwynesque fashion, that comment obliquely sums up Bernstein's stature, at least in the United States. Bernstein became the guy who showed Europe what American music and musicians could do. He was the first fabulously successful American classical musician and conductor born and trained in the U.S. In his country, he became as famous and celebrated and adored as some pop figures. There was Sinatra, Ella, and Lenny. His brilliant forays into education and outreach yielded much fruit. Many classical-music listeners today owe their passion to Bernstein's innovative television programs.

Bernstein, almost from the beginning, straddled both classical and popular music. In New York, he contributed to nightclub revues and tried his hand at writing pop, jazz-based songs. In 1943, Artur Rodzinski appointed him assistant conductor of the New York Philharmonic, and that same year, Bernstein filled in for an ailing Bruno Walter on extremely short notice in a program that included some rare modern music. Bernstein triumphed. That concert, broadcast nationwide, bestowed upon him instant fame, which transferred to his composing career as well. A very brief period saw the premieres of his First Symphony "Jeremiah", the ballet Fancy Free, and the Broadway musical On the Town, which contained what became the city's anthem, "New York, New York." He directed the New York Philharmonic from 1958 to 1969, a tenure full of controversy now remembered fondly by many as that orchestra's Golden Age. Nevertheless, whatever people thought of Bernstein's conducting (the Times's chief music critic, Harold C. Schonberg, was not kind), Bernstein succeeded in making the orchestra central to the city's intellectual life. Coming from an era in which they thought of Toscanini's NBC Symphony as "their" orchestra, New Yorkers now began speaking familiarly of "the Philharmonic." Bernstein strengthened his position with his brilliant series of Young People's Concerts, broadcast nationwide on television. Indeed, throughout Bernstein's adult life, new media played an important role in strengthening his celebrity and his career. Carpers like Oscar Levant complained, "Leonard Bernstein is telling musical secrets that have been well-known for two hundred years." Yeah, but not among the lay public. For millions of Americans, Bernstein made classical music matter.

Bernstein, although a superb pianist, never assiduously pursued the life of a concert virtuoso, although he probably could have. It makes sense, however, to talk about his conducting and his composing, since both stood out far more prominently.

As a conductor, Bernstein always declared himself an heir to Koussevitzky, but his performances share little similarity with the Russian. Koussevitzky had perhaps the best-trained orchestra in the United States, with the tightest ensemble. Bernstein never seemed interested in that kind of goal. He did seem to take over Koussevitzky's interest in a certain kind of Modern American music, notably the students of Boulanger. He reminds me most, however, of Dimitri Mitropoulos, his predecessor at the Philharmonic. Indeed, most of his "innovations" – particularly his championship of Mahler – had been pioneered by others like Mitropoulos, Ormandy, Barbirolli, Walter, and Horenstein. Bernstein, however, made Mahler commercially viable and rescued him from the cognoscenti. His first recording of the complete Mahler symphonies with the New York Philharmonic (it may have been the first integral recording) caused a sensation and actually became a best-seller of sorts, paving the way for Mahler sets from major and not-so-major conductors. Bernstein is also credited for reviving Mahler's music in Vienna. Bernstein's early conducting style was energetic, edgy, and emphasized rhythm. Stravinsky reportedly said, after hearing Bernstein's recording of The Rite of Spring, "Wow." In his later years, he seemed to equate slow with "profound" and his slow movements could dissolve into goo. His repertory also shrank somewhat, as he continually revisited (and re-recorded) his former triumphs. Nevertheless, he remained a significant figure on the international scene up to his death.

While conducting provided Bernstein with a primary income, celebrity, and an eminent place among postwar musical performers, he considered himself primarily a composer, and in years to come, he may well come into higher regard as a creator. Curiously, he had very little formal compositional training. Most of his study combined the advice of artist friends with a phenomenal ear and musicality. A musical omnivore, he seemed to have heard it all and understood it all: Bessie Smith's blues, Peter Duchin's commercial swing, Gershwin, Stravinsky, John Coltrane and Ornette Coleman, Hindemith, Mahler, Schumann, Ives, pop (especially from the Thirties), hard bop, Copland and Diamond, Latin-American music both high and low, Nielsen, Milhaud, dodecaphony, and rock. A surprising number of his interests found its way into his work. Critics accused him of being a musical magpie, but they probably missed the point. The ghosts of many composers flit through Bernstein's music – Hindemith, Stravinsky, Copland, Gershwin, Schoenberg, even Tchaikovsky – but through some alchemy, they transform into pure Bernstein. Although he included dodecaphonic passages in his scores, he stood strongly for tonality overall at a time when many of his contemporaries scorned it. His Broadway work and popularizing instincts also made him suspect. However, today the pendulum has swung back, and Bernstein increasingly looks like a prophet in his anticipation of post-Modernism and in his mining of vernacular sources. The people who look down on his musicals tend to look down on musicals altogether. What strikes us now is the fact that he played the game at a higher level than almost all of his contemporaries. Many consider Candide the finest musical ever, except for those who award the prize to West Side Story. The ambition of his shows paved the way for many of the best of his successors. Even his failed musical 1600 Pennsylvania Avenue anticipates the Brechtian vaudeville of Sondheim.

Melody and rhythm comprise the chief ingredients of Bernstein's early work. One also sees a love of intricacy and play throughout his career which comes out in startling ways: the canonic second movement of the Chichester Psalms, the "Wrong-Note Rag" from Wonderful Town, the massive stretto in Candide's "Glitter and Be Gay," the serial games worked out in the Third Symphony, and the entire Prelude, Fugue, and Riffs, to many the most brilliant classical evocation of jazz, with its written-out "jamming" finale.

Bernstein himself remarked that all of his music, even in other genres, was theater music and in so doing captured his musical essence. On the podium, his readings (and his body language) enacted spiritual dramas. Most of his scores seemed inspired by the same meta-story: the loss of and the attempt to recover faith. This reaches its high point in his Third Symphony "Kaddish" and in his huge Mass. In his dramatic orientation and in his love of the large orchestra and hybrid forms, he reminds one of a modern Berlioz. For a composer so well-known, Bernstein, like Berlioz, didn't write all that much. Conducting gigs ate into lots of composing time, but despite at least one famous farewell to the podium, he didn't seem able to resist the lure of the baton. Many of his most ambitious works remain somewhat controversial. His three symphonies, in particular, seem to give writers problems: Is the Age of Anxiety Second a symphony or a piano concerto? How does one solve the problem of Bernstein's blush-making text when presenting the Third? Bernstein had a hankering to compose "important" work – in his formulation, work central to the currents of his time, as his great hero Mahler did (he called Mahler the central figure of the Twentieth Century, completely outflanking those who voted for either Stravinsky or Schoenberg). Sometimes his reach exceeds his grasp.

Critics derided Bernstein's championing of his music. Indeed, Bernstein was perhaps his own most persuasive advocate, and furthermore, he could get it into concerts without programmers' objecting. However, one can easily refute the charge that only his conducting preserved his compositions, simply by pointing to the fact that several years after his death, many other conductors continue to perform his major works. Excepting Halil, and the magnificent Songfest (one of the great orchestral song cycles of its time), the later music – the opera A Quiet Place, the Concerto for Orchestra, the Missa Brevis, Touches for solo piano, Arias and Barcarolles, and the Divertimento for Orchestra – seem under a cloud. These scores present a more austere face than their earlier, scintillating brethren, but it's early days yet. Nearly twenty years after his death, Bernstein remains a significant and viable figure in the history of American music.