Option 1 - the easiestUse the tram No. 22 to stop Pražsk&yacute; hrad, turn left and in 5 minutes you reach the 2nd Courtyard of Prague Castle. Option 2 - pleasant walk down the hillUse tram No. 22 to Pohořelec and go down the hill. In 10 minutes you reach Hradčany square. Option 3 -&nbsp;demanding way with a&nbsp;view of the roofs of Lesser TownBy the tram No. 22 to Malostransk&eacute; n&aacute;měst&iacute;, then turn to the street Z&aacute;meck&aacute; and after 15 metres turn left to Thunovsk&aacute; street, it takes you to the New Castle Stairs. Climb the steps up to Hradčansk&eacute; square with the Gate of Giants - the entrance to Prague Castle. Option 4 -&nbsp;shorter way through the Old Castle StaircaseTake metro line A&nbsp;(green) to station Malostransk&aacute;, then follow the tram No. 22, after 100 metres turn left to the Old Castle Stairs and climb the steps up to the gate Na Opy&scaron;i. Option 5 -&nbsp;the way through the Royal Garden, only in summer seasonUse the tram No. 22 to Kr&aacute;lovsk&yacute; letohr&aacute;dek stop and enter the garden. Pass the Royal&nbsp;Summer Palace and go through the garden and within 15, 20 minutes you reach Prague Castle Riding School.
Svatojirske namesti, Castle DistrictPrague 1 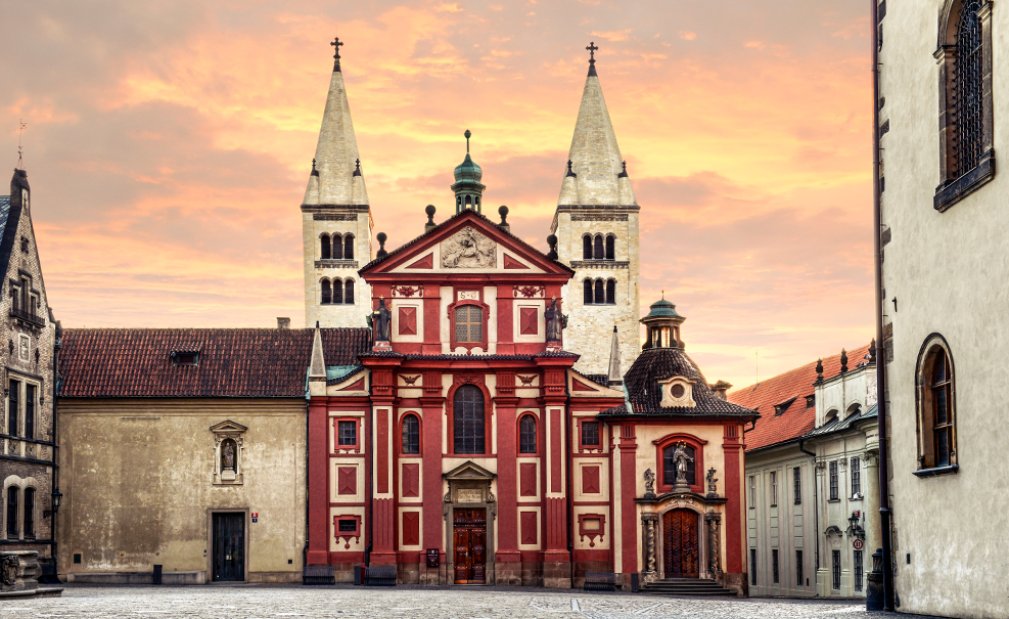 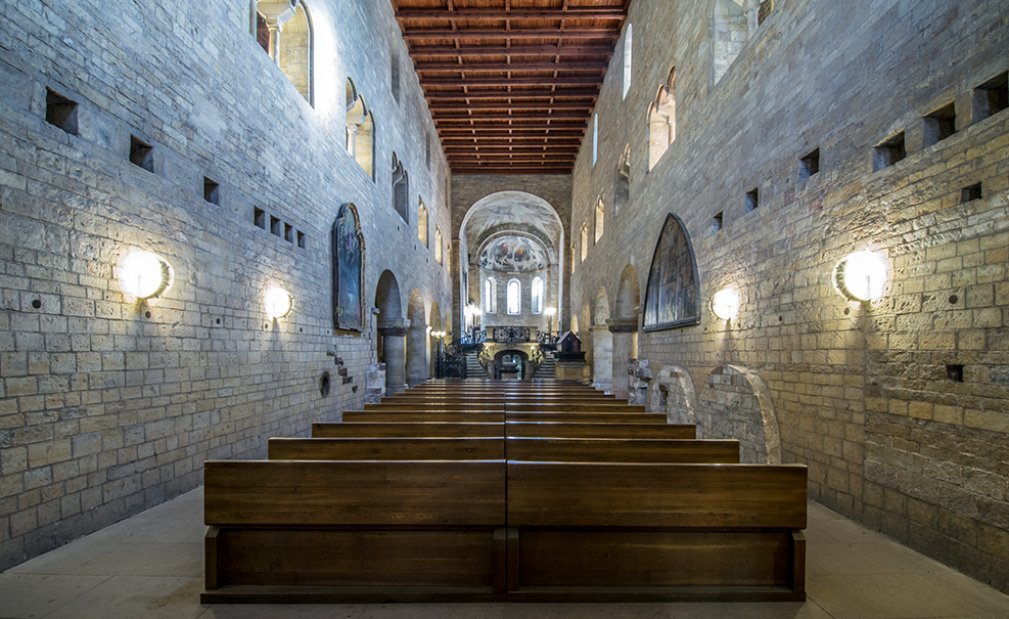 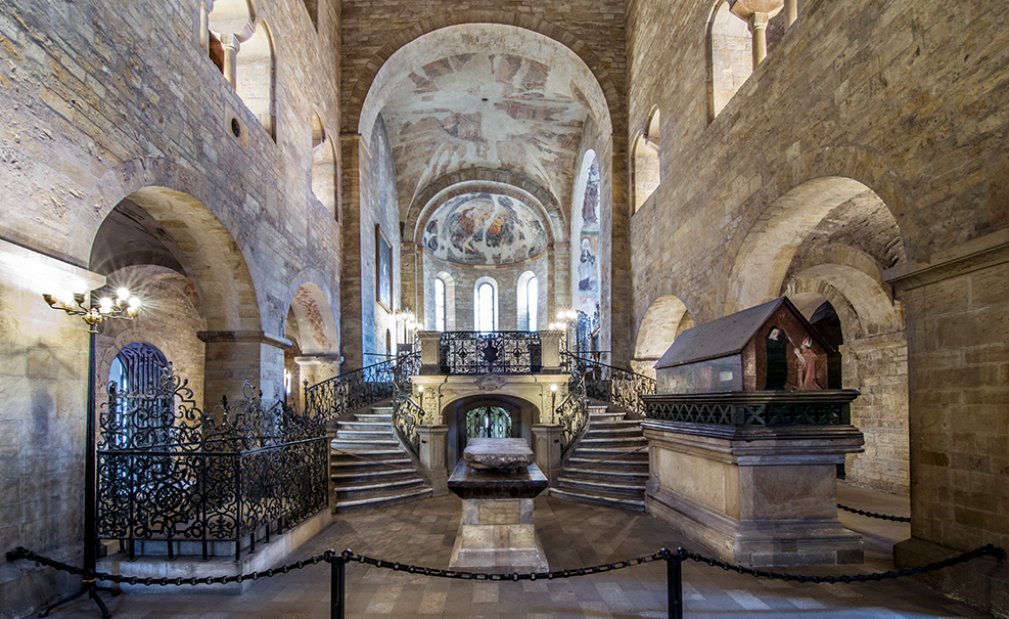 The rich Baroque façade of an unexpectedly plain church, one of the most beautiful Romanesque remains of the city, is concealed in the heart of the Prague Castle complex. Its two white towers can be seen from afar. As was the case with the cathedral, the St. George Basilica served as a royal mausoleum and it played an important part in the religious life of Bohemia in the middle Ages. The visit of the church is independent of the convent, which exhibits the National Gallery’s collections from the 19th century.

The St. George church was founded in 920. It was, as was the cathedral, one of the very first stone buildings on the site of Prague Castle. Most of the building as we know it today dates back to the middle of the 12th century when the convent was rebuilt after a great fire. The Baroque façade was added in the 17th century.

Stepping into the church, visitors are stricken by the austerity and solemnity of the place, accentuated by the whiteness of the limestone, the monumental pillars and columns and the dimmed light, which contrast with the bustle on the outside. The crypt also presents with great sobriety, conducive to contemplation.

The church was soon used as a place of burial for the members of the reigning family, the Přemyslids. The greatest one is Saint Ludmila, the very religious Christian grandmother of Saint Wenceslas; she is also a major patron saint of the kingdom: her tomb is located in a chapel bearing her name and was sculpted by Peter Parler, the cathedral’s architect. Most of the tombs can be found in the lower level, except for the relics of Vratislas I, which are placed in a finely wrought chest dating from the 14th century.

Outside the building on the western side you will discover a beautiful bas-relief that represents Saint George and the dragon. It is encircled by a gate dating from the early Renaissance era in Bohemia and was made by Benedikt Riedl, the genius architect of the Vladislav Hall in the Old Royal Palace.

The visit the St. George convent, adjacent to the church, is independent of the basilica. Benedictine nuns settled there in 970, founding the oldest convent in Bohemia. The convent benefited from an immense prestige in the Middle Ages, it recruited young women among aristocratic families, or even among the royal family. It was closed in 1782, and the building was used by various institutions before it was entrusted to the Prague National Gallery, which currently exhibits its collections from the 19th century.

Option 1 - the easiest
Use the tram No. 22 to stop Pražský hrad, turn left and in 5 minutes you reach the 2nd Courtyard of Prague Castle.

Option 2 - pleasant walk down the hill
Use tram No. 22 to Pohořelec and go down the hill. In 10 minutes you reach Hradčany square.

Option 3 - demanding way with a view of the roofs of Lesser Town
By the tram No. 22 to Malostranské náměstí, then turn to the street Zámecká and after 15 metres turn left to Thunovská street, it takes you to the New Castle Stairs. Climb the steps up to Hradčanské square with the Gate of Giants - the entrance to Prague Castle.

Option 5 - the way through the Royal Garden, only in summer season
Use the tram No. 22 to Královský letohrádek stop and enter the garden. Pass the Royal Summer Palace and go through the garden and within 15, 20 minutes you reach Prague Castle Riding School.