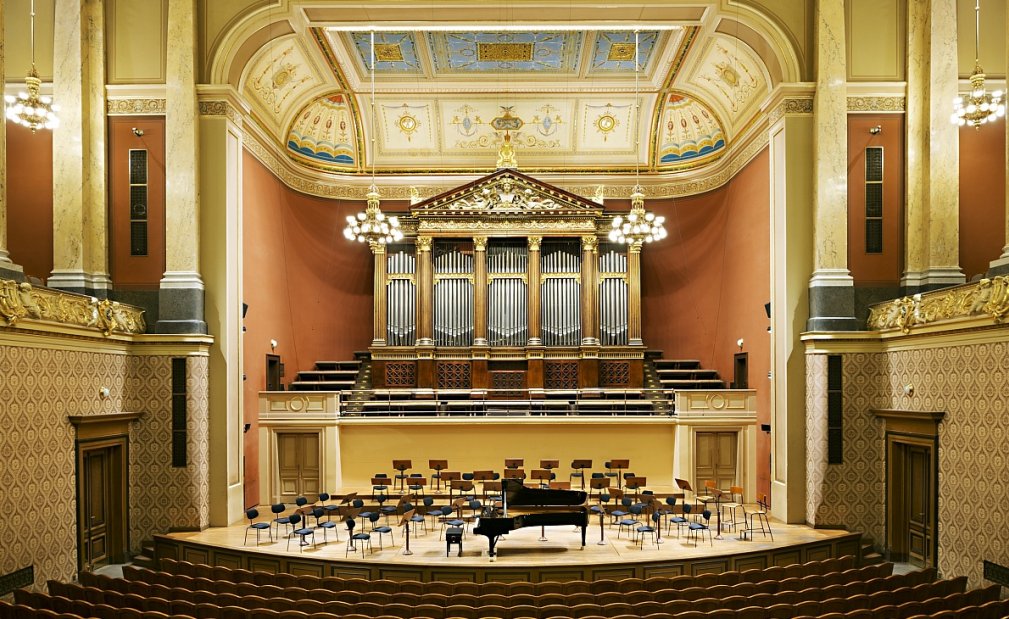 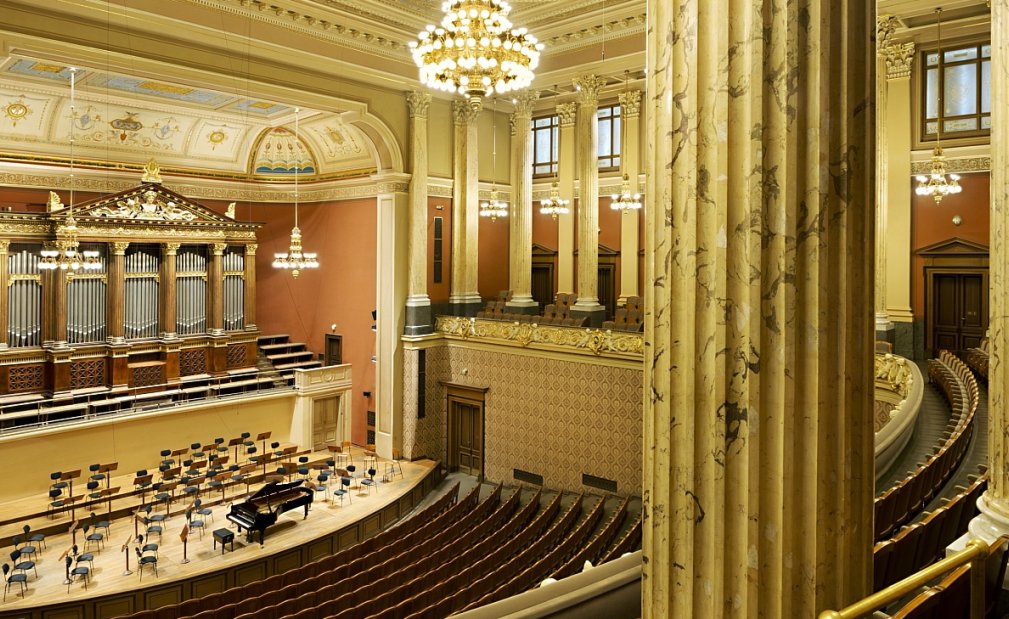 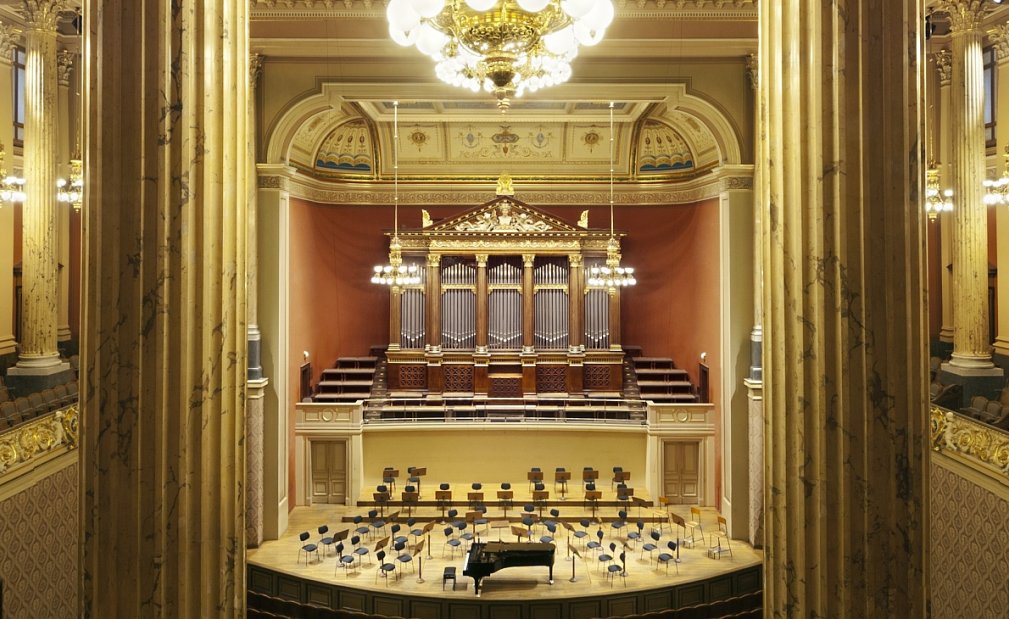 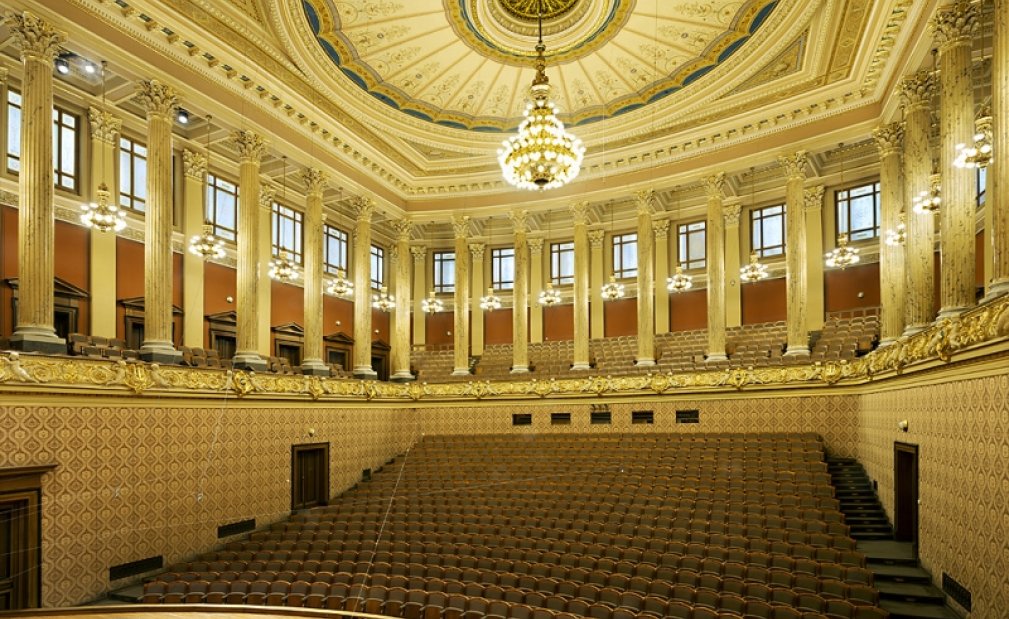 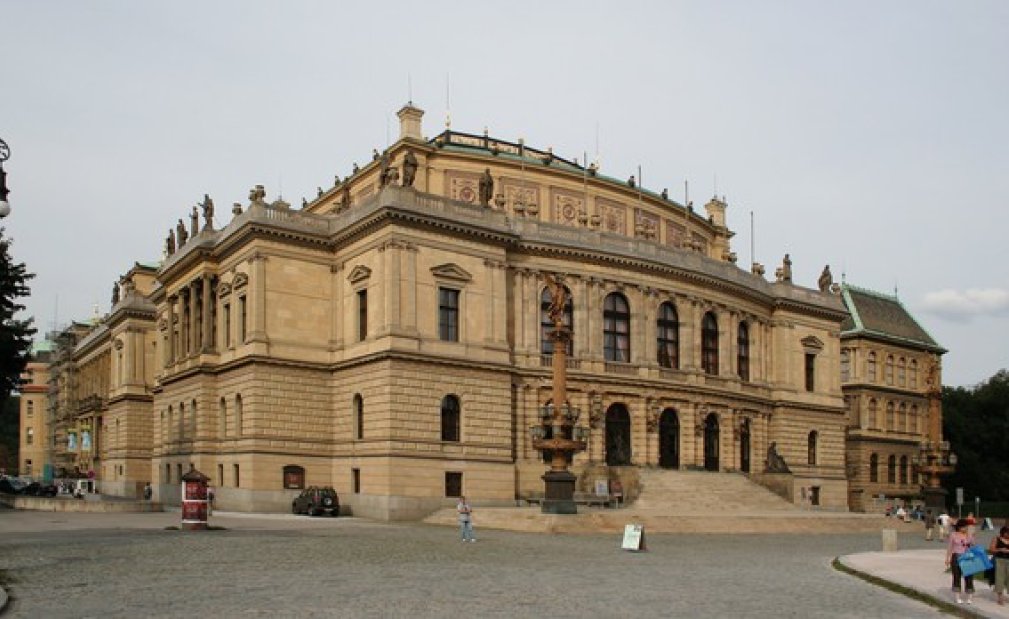 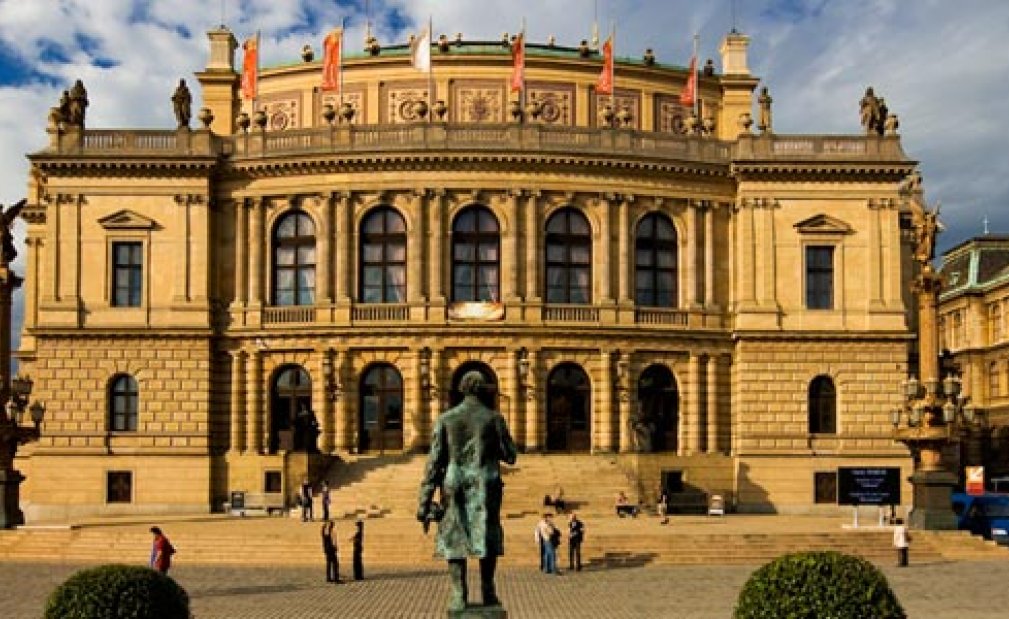 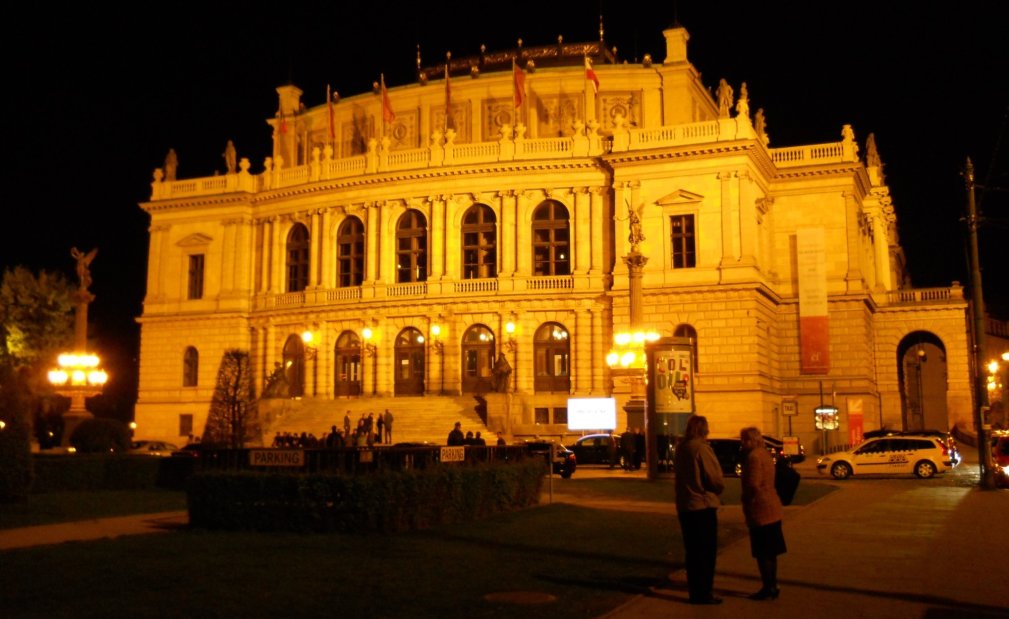 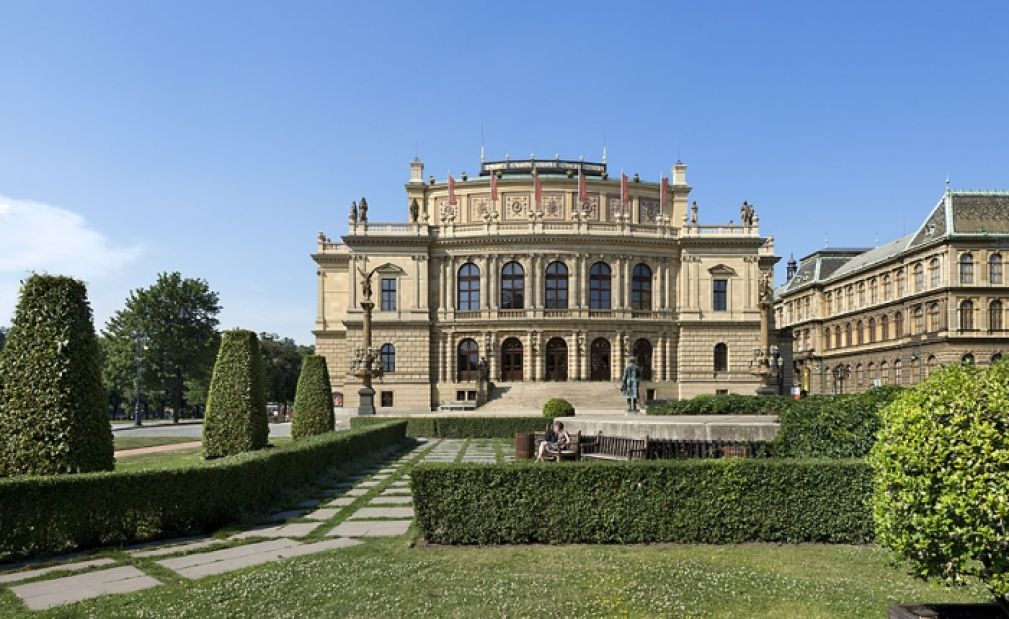 Rudolfinum is an important architectural monument of Prague. The Neo-Renaissance building on the bank of the Vltava is associated with music and art since its opening in 1885. Today it is a seat of the Czech Philharmonic, as well as the Galerie Rudolfinum and a stylish café.
One of the architecturally most remarkable buildings in Prague was erected in 1876–1884. Designed by architects Josef Zítek and Josef Schulz, it was conceived as a multi-purpose cultural centre combining exhibition rooms with concert halls. This plan was carried out to perfection and Rudolfinum still fulfils its role in the 21st century.

Situated on the bank of the Vltava in the very heart of Prague, the majestic building of the Rudolfinum was conceived as a multi-purpose seat of the Muses: a home to music, an art gallery and a conservatoire. The origins of this project, which has transcended its time, bear witness to the changes in Czech nineteenth-century society. The construction effort was spearheaded neither by the aristocracy and the sovereign nor by leading figures of the Catholic church: instead, the role of art patrons and donors was assumed by businessmen and financial institutions. Hardly any other contemporary social group could have afforded to finance the construction of such a costly and grandiose building as the Rudolfinum promised to be – and indeed still is today.
The construction of the Rudolfinum, a multi-purpose building whose concept was unique at the time, was initiated by Böhmische Sparkasse (Česká spořitelna). Founded in 1825, this savings bank was the oldest financial institution in the Kingdom of Bohemia.

The prestigious building project bore witness not only to the financial strength and potential of Böhmische Sparkasse but also to its self-confidence, sense of corporate social responsibility and belief in the supreme role of art. The new building was to be located on the right bank of the Vltava, just opposite Prague Castle.

An early construction effort on the site had given rise to a riding hall; this was later replaced by a prison, which, in turn, gave way to a sawmill owned by the leading businessman Sir Vojtěch Lanna. Now it seemed the site would finally be used for a truly outstanding purpose.

The exceptional status of the investor and the project itself is evident from the list of illustrious names that took part in the architectural tender: A. V. Barvitius, V. Lunch, G. Niemann, O. Thienemann, V. I. Ullmann, A. Wieleman, J. Zítek and J. Schulz.

The architectural design by Josef Zítek and Josef Schulz

The jury, made up of leading architects of the day such as K. von Ferstel, T. von Hansen or F. von Schmidt, chose Zítek’s and Schulz’s project, even though contemporary opinions criticised it for having overly suppressed the required architectural unity of the building’s mass and outward appearance to clearly distinguish its two functionally differentiated parts: the concert premises and the gallery. The façade of the concert hall, with a rusticated elevated ground floor that is separated from the other floors by a string course, faces southwards to the present-day Jan Palach Square.

The façade is articulated by Ionic columns and topped by a balustrade decorated with vases and statues of famous musicians. The gallery part, with two monumental corner towers in its north façade, has the same decorative elements, which gives the building a unified visual appearance. The entrance in the west front, facing the Vltava embankment, leads to the impressive Ceremony Hall of the Rudolfinum, lined by 25 arches. The central ceremonial staircase leads up to the gallery rooms. Translucent ceilings ensure proper illumination of the collections.

The era of the Viennese waltz

After its opening, the Rudolfinum became the seat of the Czech Philharmonic and also of what was probably the most important art association in the Czech lands – The Fine Arts Society (Krasoumná jednota) or, in German, Kunstverein für Böhmen. Another association that found a worthy home here was the Bohemian Society of the Patriotic Friends of Art. This organisation, one of the oldest Czech associations of art lovers, brought to the Rudolfinum the picture gallery previously housed by the Czernin Palace in Hradčany.

On Saturday, 4 January 1896, Rudolfinum witnessed the inaugural concert of the Czech Philharmonic which forever linked the orchestra’s beginnings with one of the most famous Czech composers. Antonín Dvořák ascended the stage to conduct his own works: Slavonic Rhapsody No. 3 in A Flat Major, the world premiere of his Biblical songs No. 1 to 5, his Othello Overture and also the already world-famous Symphony No. 9 “From the New World”. The concert hall that saw the performance, now the home stage of our leading orchestra, bears Dvořák’s name today.

The world-famous concert hall has been the home stage of the Czech Philharmonic since the orchestra’s very first public performance on 4 January 1896, when it played here under the baton of Antonín Dvořák. The hall served its purpose until 1918 when a decision was taken to convert it into a plenary room for the new Czechoslovak parliament. Concert activities returned to Dvořák Hall in 1940–1942 under the project of architects Antonín Engel and Bohumír Kozák. Since then the hall has not seen any significant changes. Its central element is the organ, built according to Zítek’s and Schulz’s plans by Wilhelm Sauer from Frankfurt an die Oder.