Option 1 - the easiestUse the tram No. 22 to stop Pražsk&yacute; hrad, turn left and in 5 minutes you reach the 2nd Courtyard of Prague Castle. Option 2 - pleasant walk down the hillUse tram No. 22 to Pohořelec and go down the hill. In 10 minutes you reach Hradčany square. Option 3 -&nbsp;demanding way with a&nbsp;view of the roofs of Lesser TownBy the tram No. 22 to Malostransk&eacute; n&aacute;měst&iacute;, then turn to the street Z&aacute;meck&aacute; and after 15 meters turn left to Thunovsk&aacute; street, it takes you to the New Castle Stairs. Climb the steps up to Hradčansk&eacute; square with the Gate of Giants - the entrance to Prague Castle. Option 4 -&nbsp;shorter way through the Old Castle StaircaseTake metro line A&nbsp;(green) to station Malostransk&aacute;, then follow the tram No. 22, after 100 metres turn left to the Old Castle Stairs and climb the steps up to the gate Na Opy&scaron;i. Option 5 -&nbsp;the way through the Royal Garden, only in summer seasonUse the tram No. 22 to Kr&aacute;lovsk&yacute; letohr&aacute;dek stop and enter the garden. Pass the Royal&nbsp;Summer Palace and go through the garden and within 15, 20 minutes you reach Prague Castle Riding School.
Prague 1 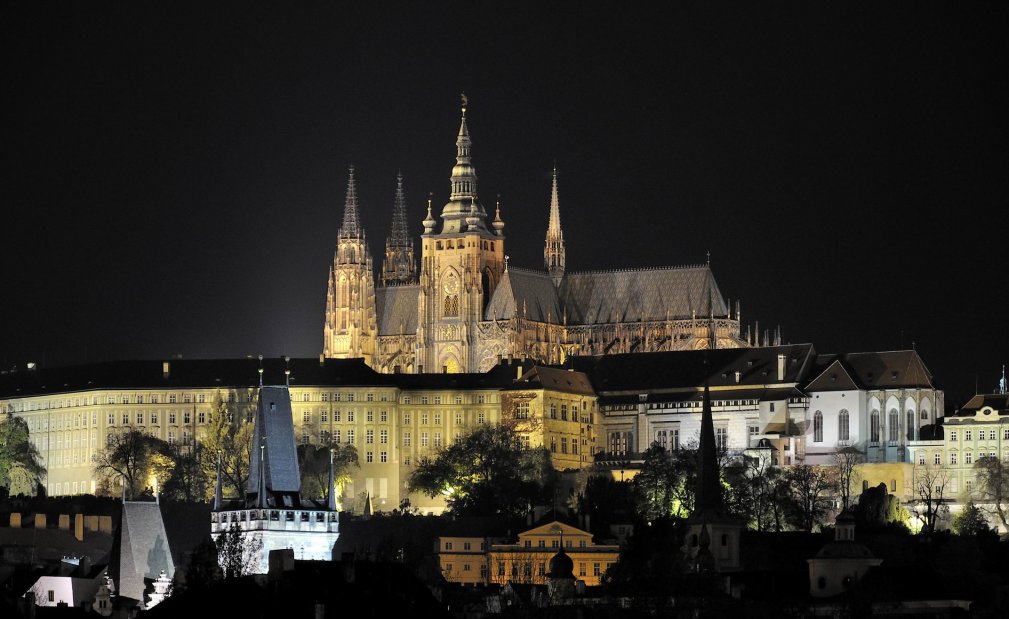 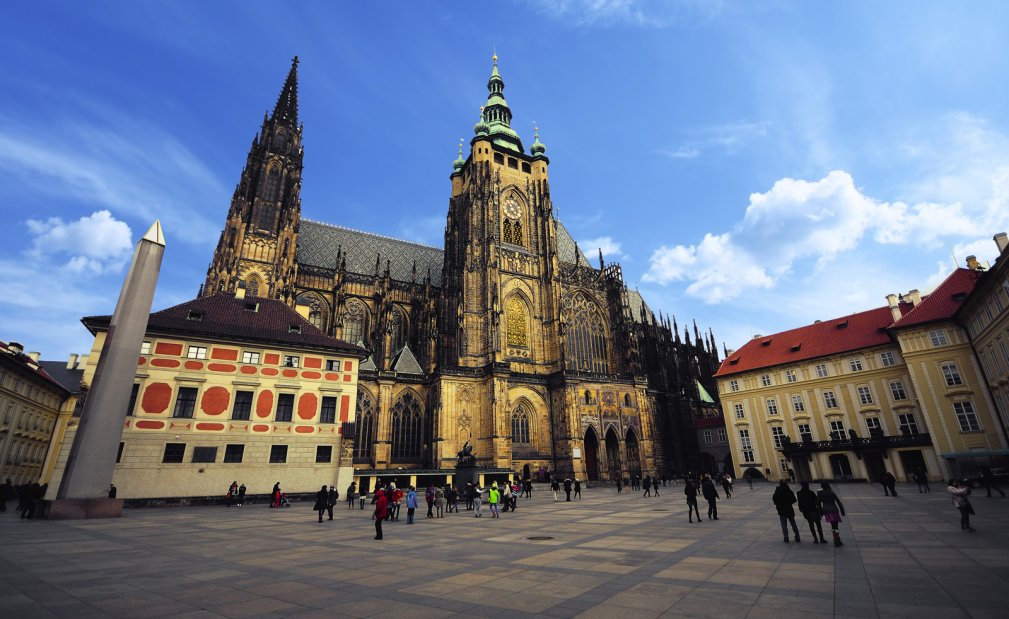 According to the Guinness Book of World Records, Prague Castle is the largest coherent castle complex in the world, with an area of almost 70,000 m². A UNESCO World Heritage site, it consists of a large-scale composition of palaces and ecclesiastical buildings of various architectural styles, from the remains of Romanesque-style buildings from the 10th century through Gothic modifications of the 14th century.

Prague Castle (Pražský hrad) was founded around 880 by Prince Bořivoj of the Premyslid dynasty. The first stone building in the castle area was the Church of the Virgin Mary of which only remnants can be seen today. In the 10th century, St. George's Basilica was founded and the first Czech convent was established there - St. George's Convent, which now houses a gallery. St. Vitus Rotunda, also from the 10th century, was replaced by St. Vitus Basilica in the 11th century, and it is where St. Vitus Cathedral stands today.

Starting in the 10th century, Prague Castle served as the seat of Czech princes and later kings and the seat of the Prague bishop.

Prague Castle experienced one of its greatest periods during the reign of Charles IV (1346-1378) when it became the seat of the Holy Roman Emperor. The Royal Palace was rebuilt, the fortifications were strengthened, and the construction of St. Vitus Cathedral was initiated, following the style of French Gothic cathedrals of the time.

The expansion of the Castle continued during the reign of Charles' son Wenceslas IV, but the Hussite wars (1419 - 1437) and the subsequent decades during which the Castle was abandoned lead to its deterioration.

King Vladislav Jagellon moved into the Castle after 1483 and the complex grew once again. New fortifications and guard towers (the Powder Tower, New White Tower, and Daliborka) were built. The Royal Palace was further remodelled and expanded by the grandiose Vladislav Hall, one of the first demonstrations of the Renaissance style in the Czech lands.

By the time the Habsburg dynasty took over the Czech throne in 1526, the Renaissance style was in full swing in Europe. The seat of power moved to Vienna and Prague Castle served mainly for recreational purposes. The Royal Garden was built and entertainment sites such as the Belvedere and Ballgame Hall were added in the 16th century. The Cathedral and Royal Palace were modified. New residential buildings were built to the west of the Old Royal Palace.

The reconstruction of the Castle culminated during the reign of Holy Roman Emperor Rudolf II who became Czech king in 1575 and moved his court back to Prague. He wished to turn the Castle into an elegant centre of power that would attract foreign artists, scientists and diplomats. The north wing of the Palace and the Spanish Hall were added to house the emperor's vast collections of art and science.

The Prague Defenestration of 1618 initiated a long period of wars during which Prague Castle was damaged and looted, rarely serving as the seat of power.

The last large reconstruction of the Castle took place in the second half of the 18th century when it took on a style of a chateau. However, the seat of power was again in Vienna and the Castle continued to deteriorate.

In 1848, Emperor Ferdinand V moved to Prague Castle. The Chapel of the Holy Cross on the Second Courtyard was rebuilt and the Spanish Hall and Rudolf's Gallery were remodelled.

With the fall of the Austro-Hungarian empire in 1918, Prague Castle welcomed the first president of independent Czechoslovakia, Tomáš Garrigue Masaryk. Some needed remodelling was commissioned to the Slovenian architect Josip Plečnik. The construction of St. Vitus Cathedral was finished in 1929.

After 1989, many areas of the Castle were made accessible to the public for the first time in history, including the Royal Garden, Ballgame Hall, the south gardens, or the Imperial Stables. Today, Prague Castle is the seat of the Czech president and the most important National Cultural Monument of the Czech Republic. A number of priceless art relics, historical documents, as well as the Czech Crown Jewels are stored there.

Exhibition "The Story of Prague Castle"

Option 1 - the easiest
Use the tram No. 22 to stop Pražský hrad, turn left and in 5 minutes you reach the 2nd Courtyard of Prague Castle.

Option 2 - pleasant walk down the hill
Use tram No. 22 to Pohořelec and go down the hill. In 10 minutes you reach Hradčany square.

Option 3 - demanding way with a view of the roofs of Lesser Town
By the tram No. 22 to Malostranské náměstí, then turn to the street Zámecká and after 15 meters turn left to Thunovská street, it takes you to the New Castle Stairs. Climb the steps up to Hradčanské square with the Gate of Giants - the entrance to Prague Castle.

Option 5 - the way through the Royal Garden, only in summer season
Use the tram No. 22 to Královský letohrádek stop and enter the garden. Pass the Royal Summer Palace and go through the garden and within 15, 20 minutes you reach Prague Castle Riding School.